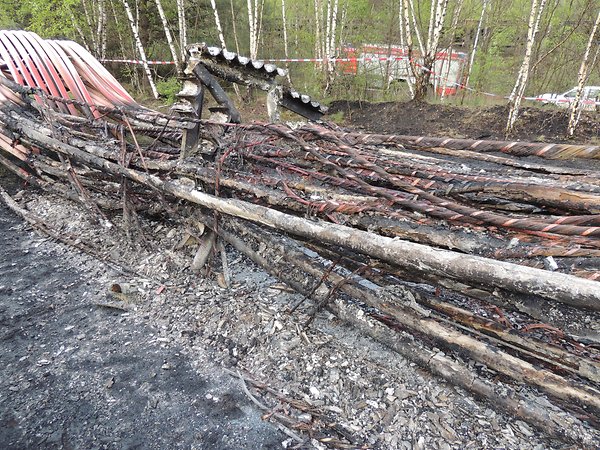 We speak up as those who caused the breakdown of the lignite mining in the Hambach open pit last Sunday morning, April 24, 2016. As a target of our attack we chose the uncovered ground lines between the coal bunker and the conveyor belts collection point. With these cables all excavators, spreaders and conveyor belts are connected. The cables pass from the substation on the western edge of the pit near Oberzier, where is transformed from 280kV down to 30kV, to the conveyor belts collection point on steel frameworks at a height of about 20 – 200 cm. Including the insulation they were about 10 cm thick.

In order to achieve a secure effect on as many cables as possible we poured and ignited tremendous loads of petrol under the cables. Near the fire, there were neither buildings nor equipment to which the fire could have jumped over. There also were no people around. The various blackouts were accompanied by bright flashes, visible in the entire pit. They were due to the discharges of the power cables as soon as the insulation was melted away.

Our action was not only directed against RWE, but also against the dominant conditions. In a world where capital interests are in the foreground and the power structure ruthlessly pushes through its myopic interests against all odds, and against humans and nature, a radical resistance is needed. We want to oppose a resounding „NO“ to this system, as a first step to tilt this balance of power at some point.

The fatal impact of coal mining and coal-fired power generation on humans, nature and climate are well known. Nevertheless, the excavators of RWE are digging on every minute. We succeeded to prevent this for some time at least.

The attempt to mediate between RWE and the lignite resistance reveals the power structure. To mediate means to prompt the resistance to be less radical, less “mean” to RWE or in other words: “the resistance should not disturb”. Those who act this way accept the existence of RWE and its work of destruction as given. Thus the authoritarian violence is accepted, which is included in the mining and the power generation from coal and which is legitimized by law. But the rebel violence that resists appears to be illegitimate. The result can be only a whatsoever guarantee for continuity of operations for RWE, which now has the blessing of a part of the resistance as well. Namely of the part which has allowed to be incorporated into the arbitration procedure. The resistance is divided into the disabled and integrated part and the remaining isolated and “illegitimate” part.

When people say that such an action would harm the resistance, then this means that they accept that the power of the rulers can divide the resistance in good and evil. Evil is what hurts, really bothers and is effective. The pro lignite diary Kölner Stadt-Anzeiger writes: “Arson, violence against people, excavator occupations and senseless vandalism against technical facilities with the aim to paralyse opencast mines and power plants – the violence of criminal activity is increasing.” However occupations, arson and blockades are not senseless, but hinder very precisely the destructiveness of RWE. What in fact harms the resistance, is the obedience to the mightiest and their media who try to tell us what is good and evil. We should listen to our conscience and our reason, not to the media.

With our action, we have demonstrated that clever and careful militancy, with moderate and defensible own risk, can halt the normal operation of RWE. Our action could have been taken by any small group. We needed for it no special skills, knowledge or accesses. All necessary information is publicly available.

For a radical, resolute and direct resistance! For a world that will not be destroyed on behalf of capital interests!

On the night of December 31st we carried out 3 acts of arson and sabotage against the open cast lignite mine operated by RWE at Hambacher Forest.

We set up homemade stingers on the road used by the mine security forces to harass and distract them whilst we set fire to various bundles of cables and some wiring boxes by the side of the train tracks which are used to transport brown coal from the mine to nearby power stations. Halting the trains for some time.

Then we put the torch to a telecommunications mast on the edge of the mine and watched from a distance as the entire device went up in flames and continued to burn for over an hour.

And finally, just after midnight we attacked again, setting up more stingers on the security road closer to their compound. We then set fire to a burning barricade of car tyres and a large pile of logs by the roadside to lure security into our traps before retreating again into the forest to the sound of fireworks.

By making use of homemade stingers (wooden boards with large nails through them) we send a warm and rebellious embrace to imprisoned anarchist comrade Emma Sheppard on the anniversary of her arrest.

We carried out these attacks in solidarity with the ongoing resistance to the mines expansion from within the Hambacher Forest.

Strength and courage to all anarchist fighters, on the inside and outside.