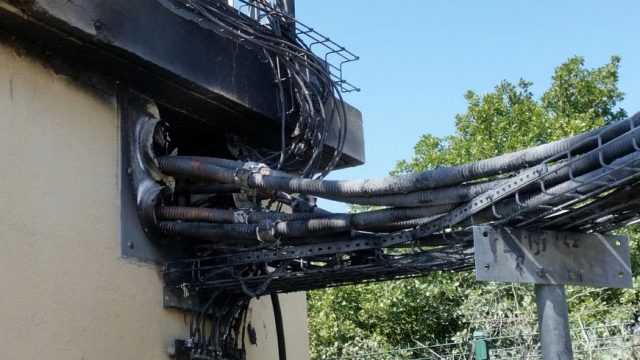 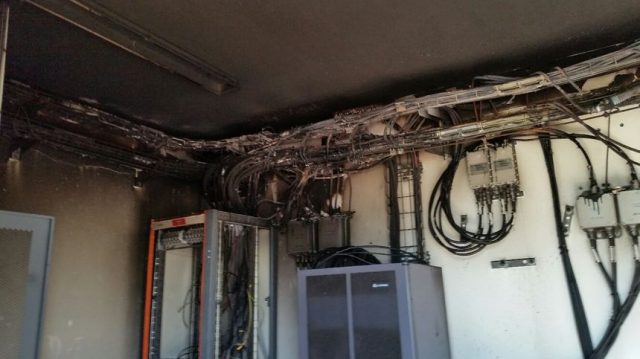 As you reach to the top of the hill there’s the Great Bear right above your head. And then, below, you see the lights of Issoire, which make war on the stars in the sky. And above all, above everything, there’s a repeater next to you, which reminds you that you didn’t come to recite poetry. Light up the fire…

In the early hours of 22nd August we set fire up there on the hill. In Moidias, two repeaters that serve the telephone line from Issore to Brioude and the broadcasting of many radio frequencies went up in flames. As we couldn’t turn off the city lights, at least we switched off the smartphones .

Because this world is too narrow, it aims at the normalization, control, sterilization and digitalization of any individuality. Because we wanted to give ourselves a breath of air, feel alive rather than suffocate. True, this desire for destruction could have been satisfied with an attack on Red Cross premises, a breeding farm or a migrant detention centre. We attack so as not to be yet another architect of power’s structures. We attack for immediate pleasure and not for a hypothetical radiant future.

As pointed out in other claims, technology – which keeps us immobile and colonizes our imagination – is one of the pillars of civilization. If we agree with this, we cannot be satisfied with a mere exchange of ideas. So we looked for sensitive points on which to act. By burning repeaters, we not only aim at inflicting the greatest damage on the promoters of technological prosthesis. It’s a way of communicating, interacting, sabotaging civilization. So as to break the routine of honest citizens, workers, consumers, all the people – rich or poor, young or old, super-connected or techno-sceptical – who contribute to the development of deep-flow civilization, where we continuously send out information, argue via internet and fuck via SMS. So that those who depend on screens and headphones are immersed in the anguished silence of failed communication, and they are precisely those who are building and perpetrating this kind of relation with the world, thus guaranteeing the fact the latter runs no risks.

But this attack also comes from the will to question the relation we have with the technological mediation of the living (human and non-human) and the digitalization of the existent. It allows us to criticize in deed the construction of all the rules (sexist, racist, homophobic, specist…) spread over by the incessant flow of images and information and which have almost crushed our individualities.

If we add the fact that many comrades are hit by repressive proceedings where, also thanks to the collaboration of phone operators,  the means of communication become instruments to capture those who revolt, here are quite a few reasons to barbecue repeaters. Quite a few reasons none of which contemplate the perspective of opening a crack in normality so that revolution occurs. If this hope embraced us in the past, it is now dead in our hearts.

We wanted this attack to resonate with the string of other barbecues (of repeaters, vehicles and premises of Enedis [a branch of Electricité de France, the national electricity network]…), that took place in the summer of 2017 about which we share many of the criticisms and proposals. In this respect we have asked ourselves what we should do so as not to fall into a dynamic of competition. How be inspired by others’ actions without this becoming a challenge to see who does the biggest one (repeater)?

This is what led us to analyse, plan and carry out this attack. What took us days was the definition of the practical aspects of the plan (how to start a fire without getting burned, for example), but also the sharing of what was at stake, the specificities, desires and limits of each individual who took part in it. We put ourselves at stake and found the means for our desires, even if it was hard physically and emotionally. The beauty of the process through which we tried to unite the violence of the intent with the benevolence of attention, gives us as much satisfaction as that of having succeeded in destroying those repeaters. We are not soldiers, it is in moments like these that our individualities become real, encounter one another and discuss with one another. That we make our own synthesis between theory and practice. That we organize ourselves to destroy the relations of power, attack the dominations that shape us and which we reproduce just like they structure the world.

We destroyed the repeaters by forcing the doors or fences that protected them and placing incendiary devices on different parts of the cables. The devices were simple one and a half litre plastic bottles filled with petrol, on to which a good piece of firelighter was attached with wire.

We won’t end this communique without first expressing our solidarity with Krem and Kara and with those who attack the world and don’t forget they themselves could be part of its mechanisms.

From Attaque via Act for freedom now