The devices described here can leave traces, all the more so if they don’t ignite. Thus, all manipulations need to be done in a clean environment, with a pair of one-use rubber gloves, while covering your mouth and hair, using a clean garbage bag spread out as a work space, and while wearing a k-way type tracksuit (where hair of any sort won’t cling to it). The device can be stored in a garbage bag or a freezer bag before removing your gloves, to transport it. If the material is bought, don’t buy everything at the same place and paying in cash could be a good idea. Lastly, in the case of a raid, it’s better to be rid of the material and packaging before use.

Lastly, do several tests before using it for real, to be sure that the brands of different materials work well together and to avoid bad surprises!

After lighting it, you must in general wait around twenty seconds before the interior filaments are lit and that they will re-light if they extinguish.

Small sparks are given off by candle once it is lit. This device is very simple to make, but it is bright and thus easy to notice, by a passerby for instance.

You can count on 5/6 minutes of delay, before the fire-starter cube lights in turn and sets the rest of the incendiary device alight.

With a knife, remove the sulfur from the matches while avoiding adding wood shavings, and reduce it to a powder (by wrapping it in paper and crushing it with a knife handle, for example).

Put the sulfur in the middle of a square of cellophane and form a tight ball, by twisting the cellophane well. Fix this ball well to the incense stick or the anti-mosquito spiral with an elastic, ensuring that the ball is well stuck, and that the ball isn’t surrounded by elastic all the way until the end (illustration below) – it’s necessary that the ember of the spiral is first in contact with the sulfur, otherwise there is a risk that the device will come undone before igniting. 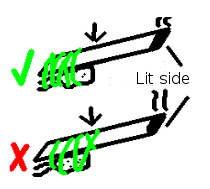 This device allows an adequately long delay, depending on the length of the spiral/incense before the sulfur: one could do tests to evaluate the time that is obtained. It is also more discreet: there is not a flame before the trigger, but just a small ember and a thin trail of smoke. But it is also more complex and can thus necessitate testing it multiple times before using it, with perhaps different brands for the incense, cellophane and/or matches, and with the amount of manipulations, it’s very important to pay attention to not leave a trace. After lighting it, do not blow on it to extinguish the flame, but shake the device! 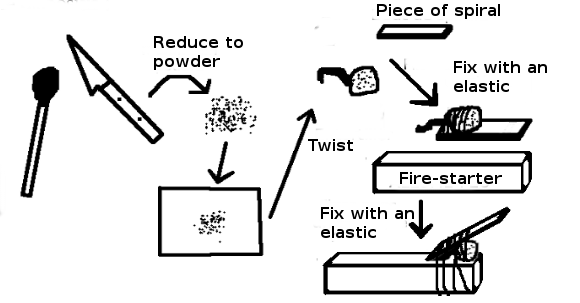 [Notes from Warrior Up:
– You can use multiple delays per incendiary device, so that if one fails the rest of the incendiary device still has a chance to ignite.
– In our experience the anti-mosquito spiral is more reliable than incense.
– An alternative configuration that involves less manipulation is using matches covered in camping fire-paste to light the fire-starter, rather than the sulfur cellophane ball. In a match-book, two rows of matches are attached by a staple. You can use one row of these matches to wrap around the spiral, and if there is enough contact the ember of the spiral will light the matches. However, adding fire-paste to the match-heads and the fire-starter ensures this better. In addition, fire-paste between the fire-starter and the plastic bottles of accelerant (see point below) will cut down the time the lit fire-starter takes to pierce the plastic and ignite the accelerant (from over a minute to a few seconds).
– Tape vs. elastics: tape is more likely to pick up DNA evidence during construction, so should be handled very carefully, but it allows a sturdier construction that is less likely to be displaced during transport. Thin strips of duct-tape work well.
– Recommendations for the rest of the incendiary device: two plastic 1.5 L pop-bottles, taped together so that when lying down they form a valley between them. Fill with a mixture of 3/4 gasoline and 1/4 motor oil. To prevent leakage, fill the containers only 3⁄4 full, leaving the top quarter as air space for vapors to collect. If the delay/igniter devices described above are taped into the valley the bottles make together, gravity will bring the lit device down into the accelerant even if the tape is burned. If you were to tape the delay/igniter device to a single bottle, it’s possible that once the fire-starter is lit it would burn through the tape before the plastic bottle, and come undone before the device could ignite. ]