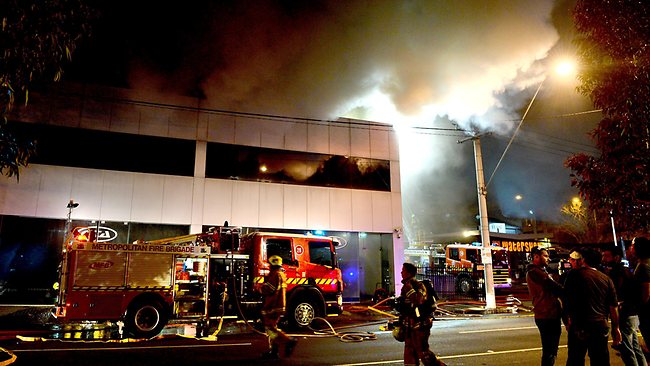 Last night (Sept 2nd 2013) for the first time in living memory but definitely not the last, the flames of anarchist insurrection roared high above the toxic skies of Melbourne putting a swift end to years of local ‘activist’ and ‘social anarchist’ inactivity in this city.

At approximately 7:30PM we gained entrance to Gran Turismo Autos, a luxury car dealership on Spencer St in inner-city West Melbourne via a poorly secured rear window and placed an improvised incendiary device with timer already set under a desk in an office area adjacent to the showroom then promptly fled the building via the same window through which we gained entry.

As the target was in a high profile CBD location surrounded by surveillance cameras and many security patrols we had to get in and out of the building very quickly. We did not have either the time nor intention to leave any potentially incriminating slogans or communiques at the scene. The whole operation was completed in under 10 minutes and we were very careful in disguising our appearances so that if any CCTV footage were to be released to the spineless media by the fascist Victorian Police Force it would be next to useless for them.

Once we had securely fled the scene and safely discarded our disguises we retreated to the rooftop of an inner city housing commission tower block so we could have a nice vantage point to view the results of our handiwork.

Much excitement and pure joy-filled hatred was expressed as we watched the flames flickering in the night and the huge plume of black smoke rising into the sky. Much laughter was shared also once we saw the huge amount of fire brigade, police and emergency services vehicles in attendance, the scale of the fire exceeding even our own expectations.

No doubt this action will be condemned not just by the so-called authorities but also by members of Melbourne’s so-called ‘activist’ community, many of whom claim to be anarchists even though they shun direct actions preferring instead to participate in pathetic police-chaperoned ‘protests’ and other useless activities that achieve absolutely nothing. We will wear your condemnations with pride you traitorous inactive scum!

Last nights action is only the beginning of a new phase of insurgency never before seen on the occupied continent of Australia and we are hopeful that it will inspire similar actions not just in Melbourne, but all over Australia!

The era of useless social anarchism is over, let the fire and smoke of arson usher in the new era of insurrection and insurgency!!